This photograph was taken on one of photographer David Slater’s cameras. 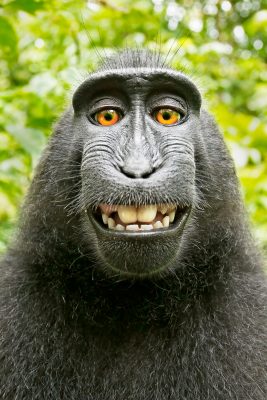 The story is amusing – David explains that while he was taking photographs of a small group of monkeys, one of the older monkeys picked up one of David’s cameras and took a few photographs of itself – the famous « monkey-selfie’.

When David discovered the image, he thought, rightfully, that he had an interesting image and that he would be able to find someone who would buy it.

However, this has created a ridiculous situation, in which David is now being sued by PETA (People for the Ethical Treatment of Animals) who maintain that the monkey holds the copyright. Apparently in the US there’s nothing in copyright law that says a monkey, or any animal, can’t hold copyright – but there’s nothing that says they can, either. Strange.

In addition, this is causing huge financial problems for David, who, in his defense, simply wanted to sell a charming photo of a monkey – now he’s being sued for a substantial amount of money – just for doing his job.

Personally I think that PETA are wrong to drag this through the courts – it won’t help anyone, much less the monkeys, if they win or lose. In my opinion they are doing this for publicity, and risk creating a precedent which will only harm photographers, particularly wildlife photographers, who will eventually have to get a signed release from the wild animals personal lawyers before taking any pictures.

Sadly people like PETA, for whom I used to have respect, are their own worst enemies – and create problems far greater than what they are actually there to protect. I’ll just go and put on my plastic sandals, and get out my wooden clothes…