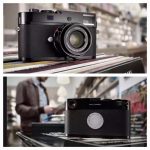 Firstly I must state that I have a huge respect for blind people, and the people who help them – as a photographer I understand how crushing it must be to lose a sense, and can only imagine what it must be like to try to live in todays complicated world.

This said, I do think that it’s a bit of a piss-take on the part of Leica to bring out the Leica M-D (Typ 262) This is a ‘modern’ digital rangefinder with a state-of-the-art full frame 24mp sensor – but it seems it has been designed for a minority group – the blind.

So why am I led to think this? Well, when I’ve taken my picture and I take the camera away from my eye to have a look at the result on the rear screen, well, I can’t – they forgot to build one in. You would be forgiven for thinking that for the price of 5900€ (Body only) they could have included a screen, but no – Leica have decided, in their wisdom, that ‘real’ (Ken Rockwell?) and / or blind photographers don’t need a screen.

Is it any wonder that these people are in a ‘niche’ market…?

It seems that Justin Beiber has had enough and feels ‘used’ – the reason? He’s fed up with people stopping him in the street and asking to take a photo with him. He has even announced on Instagram that he « …doesn’t owe anybody » and that people shouldn’t expect that, just because they’ve bought one of his albums that they have a God given right to have a photo with their idol.

Well, actually in some ways I agree (What???) it can’t be easy being followed at every step by hordes of fans and admirers, who, incidentally, were the same idiots who actually put him where he is today. The reason he started ‘singing’ in public was to become famous and earn lots of money – well, he’s done that and now considers that he’s too important to be treated like every other ‘pop’ star.

Personally I agree – I think all images of this f***-wit be removed from the Internet and we all try to forget he ever existed – along with the talent-less Kardashian sisters. These time-wasters need to be expunged from our collective memories.

So Justin, give me half your dosh and I’ll happily pose for your ‘heart-broken’ fans and admirers (all with a collective intelligence of a bath towel).